And here is a direct message from the BBR
– Federal Association of Professional Riders, which obliges us even more „the riding lesson“ understandable for all trainers and riders to implement, as we thereby preserve the cultural heritage and also the „partnership man & horse“.
And the horse in general.

Here is an excerpt from an email from BBR today:

Dear members, the classic German riding school has been declared an intangible cultural heritage in North Rhine-Westphalia. In addition, the state of North Rhine-Westphalia has Cultural form proposed for inclusion in the nationwide register of intangible cultural heritage. A decision will be made in the spring 2023. The initiator of the application was the Federal Association of Professional Riders (BBR) supported by the German Equestrian Association (FN) and the German state studs. The intention behind the application was the desire to preserve the centuries-old knowledge of horses as a cultural asset in human history. It’s about the timeless training of horse/rider according to classical principles and the training as centuries-old craft and Art form that is practiced regionally, nationally and now also internationally almost all over the world, and on which the world’s unique Profession of professional riders based. Riding is considered to be good for your health, it brings exercise in the fresh air and can be practiced into old age. Riding is close to nature and leads to a sustainable understanding of nature. Working with horses/riding has a positive effect, especially on adolescents influence and, in addition to physical skills, also promotes social skills: a sense of responsibility, courage, respect, Perseverance, self-confidence, team spirit and friendship. From the 19th century, the cavalry in Germany was primarily based on the training system of Eduard Gustav Steinbrecht (1808-1885), who as „Father of the German riding school“ applies. His book „Gymnasium des Pferdes“ is still considered „the bible“ of classical German riding school and is in the broadest sense the basis of the „Guidelines for Riding and Driving“ in Germany today. Names like Stensbeck, von Heydebreck, Müseler, Lörke, Wätjen or Bürger stand for riding masters of the 20th century. The timeless, classic German riding school takes responsibility for the creature. It is based on nature and the natural and the horse’s individual aptitudes, takes into account its physical requirements and its natural behavior and is more compliant with the rules Appropriate and health-promoting application. The classic German riding school has nothing to do with training or subjugating an animal rather, it aims at a balanced gymnastics and strengthening of his body and thus at his promotion. This work one The horse is both varied and versatile and creates and maintains a willing, willing and trusting worker Horse. The focus is on the „scale of training“, which goes back to H.Dv.12. The “Scale of Education/Training Scale” is now regarded worldwide as the trademark of good horse/rider training „Made in Germany“. The classic German riding school is passed down through the generations. Using and passing on their knowledge and skills is the task of the Representatives of professional equestrianism (rider:in, riding instructor:in, horse farmer:in) to the horse from the saddle or horse and rider together in the To instruct and promote lessons according to the contents of the classic German riding school. The BBR is also involved in politics and the public for animal welfare and is actively involved in the further development of professional riding with the aim of becoming multipliers of the to be classic German riding lessons and to live them. 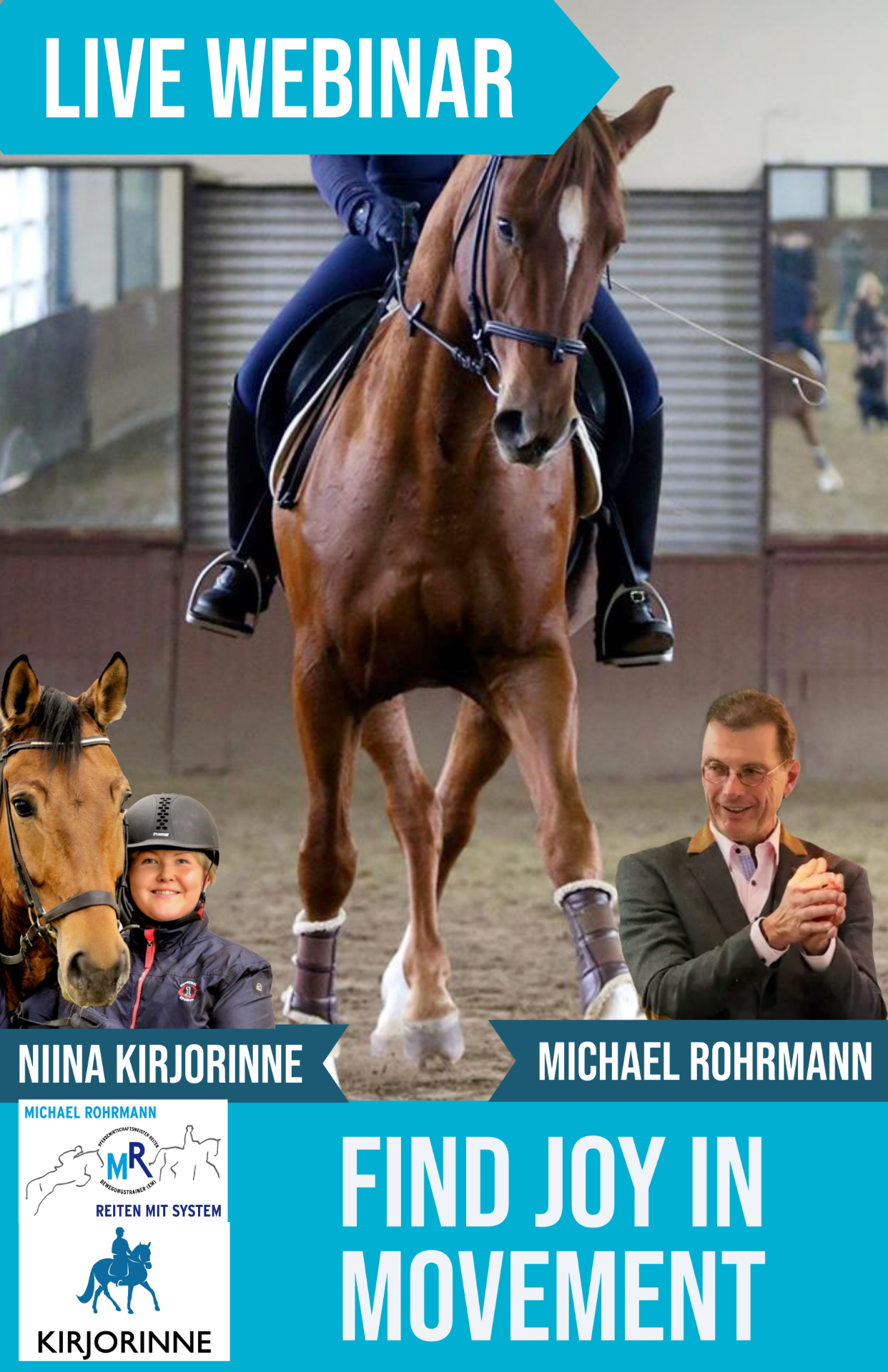 On 07 May 2022 I offer new Zoom Meeting together with Niina Kirjorinne from Finland.

We would like to give suggestions for training rider and horse together.
Enjoyment of doing things together and interacting with each other to bring two bodies into balance.
Something that is easy to say, but requires a lot of knowledge and planning and above all patience.

More information and registration on the page of Niina: https://www.kirjorinne.com/p/find-joy-in-movement/

Many thanks to Niina for the organization, her commitment and that I may contribute my thoughts.

Riders and Trainers come to Germany